Traveling with your furry friend by plane: impossible? Not really.

***This is a long post but you might find it interesting. You have been warned (as opposed to warmed – vocab builder)***

***My human convinced me to make two posts out of it. Although I think that’s because she is a little lazy I also think this is not a bad idea, so part 2 tomorrow***

***Keep reading, there are pics below***

(red, white and blue! Okay… back to the story!)

For those who already know me a little bit, you know that I have two half-brothers and that we were all born in France. We now live in New York state. Which means that, well, yes, we had to travel all the way from France to America. 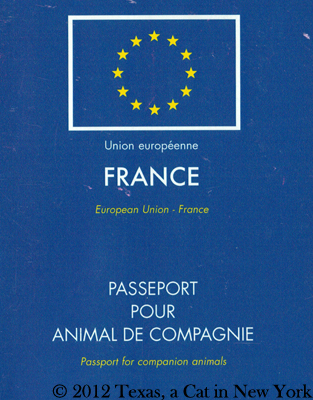 I’m not showing you the identification (vocab builder) stuff because this is private.

So we had the passport, the vaccine and the microchip already. We also needed to have a certificate of good health from our vet dated from less than one week before we left. Here are pictures of us three going to the vet: 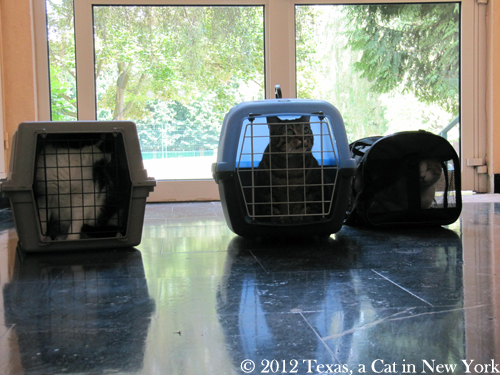 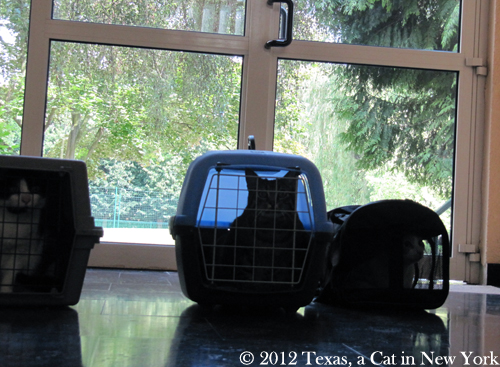 We were then ready to leave with our humans and… take the plane.

My human had convinced her husband to take Grouik with him in the cabin. Of course, there wan’t even a doubt in my human’s mind that I was going with her in the cabin (I trained her well you see).

Unfortunately for Milou, there were two reasons why he had to travel in the baggage hold:
– He was too fat (Don’t laugh! Not funny! Well, okay a little bit),
– The plane would only allow for one small pet to accompany a human, no more.

Not all plane companies allow pets to travel in the cabin and my human did some research to find the best company. Some American companies have actually stopped accepting pets in the cabin due to security issues (yawn). Basically, my human was left with two choices: Air France, the French company, and Lufthansa, the German company.

The problem with Air France was three-fold (vocab builder):
1. They’re known for losing or damaging baggage, my human has even experienced it several times (remember Milou was to travel with the baggage),
2. Although my human says service on board is generally quite good, she said there were other problems such as the staff being on strike (whatever that means) on a regular basis and the humans could not risk being stuck with 5 pieces of luggage and 3 cats at the airport,
3. Finally, the restrictions for the pet’s maximum weight and the maximum size of the bag in which the pet was to travel were stricter with them.

The only problem with Lufthansa was that the trip would be longer since the plane would go from Paris to Frankfurt, Germany, and then only to New York. But we were guaranteed – Grouik and I – to be in the cabin with our humans. So Lufthansa it was.
(I was kind of near the maximum weight – 12 pounds or 6 kilograms – allowed with Air France. Grouik was fine! Grouik is very slim!)

Here is Lufthansa’s policy regarding traveling with your furriends:

Transport of small dogs and cats into the passenger cabin
You may take a dog or cat into the cabin, if the weight of the animal (including transport container) does not exceed eight kilograms. The animal has to be kept in a box measuring not more than
55 cm x 40 cm x 23 cm. You may use your own transport box if it has the necessary measurement and is watertight and bite proof.

This was for us.

Transport of larger animals in the cargo hold
Animals that cannot be transported inside the cabin will be transported by Lufthansa in appropriate containers in an air-conditioned area of the cargo hold. You may use your own transport container for your animal if it complies with the relevant IATA (International Air Transport Association) regulations. The container must in any case be large enough to ensure that the animal can stand up and has sufficient space to move. Furthermore, containers shall be equipped with a water dish (empty).

It wasn’t difficult to find the right box for Milou but it was a problem to find the bag with just the right size for Grouik and I. It had to fit the required size and no more (because the bag was to be kept under the seat in front of our human, in the cabin). And it had to be not too small for us to feel okay inside of it. We would not be allowed to get out of it for several hours!

Fortunately, the humans found such a bag in America (because they came a little while before us, to prepare everything so that we would feel comfortable when we arrive). Here it is.

And here is me in it: 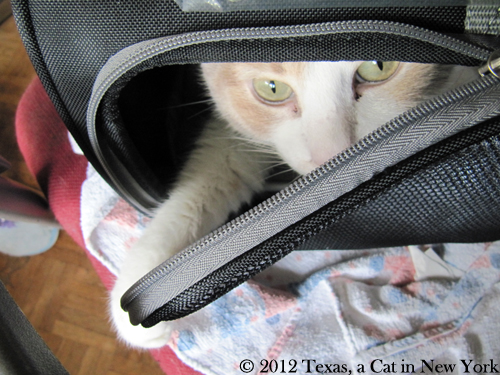 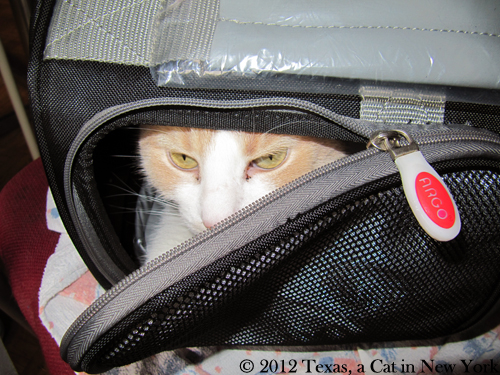 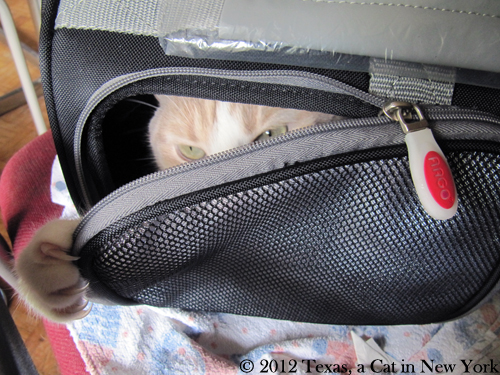 To be continued tomorrow…

34 thoughts on “How three cats (that’s us!) moved from France to America with their humans — Part 1”