Traveling with your furry friend by plane: impossible? Not really. This is part 2 of a two-part story. Check part 1 here.

Sooooo… we were ready to fly!

When the day came, we took a taxi from my human’s Mom’s home to the airport. The humans had many pieces of luggage, plus us three. At the airport, they had to give the luggage and Milou to the airline staff. They put plenty of “LIVE ANIMAL” stickers on his box. Then Milou was not with us anymore. Ceiling Cat and Milou only knew where he went!

I usually behave myself pretty well when traveling in a car (less so in a train), but of course my human was concerned about such a long trip without being able to go out of our bag.

We had little food or water the night before. My human bought water sprays to spray us from time to time during the trip and they were carrying wee-wee pads just in case. They also had some kibbles.

Grouik may be a hunter, he is an anxious cat and hates to travel. His human gave him a sedative recommended by the vet and that he had tested before to calm him (for fear he would meow all the way from Paris to Frankfurt to New York and be too scared). My human didn’t like the idea of giving me a sedative. She had some my vet had given her just in case, but she gave me a little bit of that HomeoPet Anxiety relief thing she had found in America instead. It seemed to work just fine.

The time was loooooooooong. My human says the trip in plane alone from Paris to New York (including our stop in Frankfurt) took 12+ hours. That’s without the time between homes and airports.

We had to stay in our bags all the time in each plane. That was hard because it was very hot in the plane. Even the humans (not just ours) were complaining about the temperature. Our humans were concerned for us and begged the airline staff to have us get out just a little bit to give us some water. But it was a no-no. Because some people could be allergic to us (!?) we would have to stay inside. Also the staff was concerned our humans would let us go around freely in the plane. Humans can be funny!

They allowed our humans to take the bag on their lap though, which helped calm Grouik that was starting to meow in the last few hours. They gave us a little water and some kibbles. They knew Grouik was doing okay when he tried to grab, from the barely opened bag, some of the pizza the humans had! Me, I was patient. 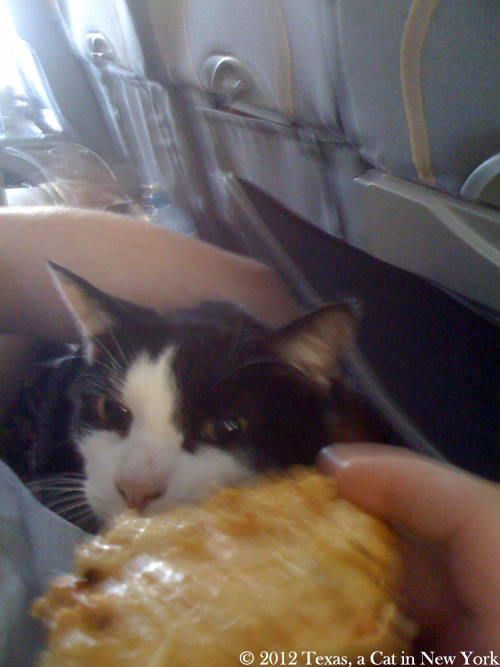 They didn’t take many pics from the trip because I think they were more concerned for our well being. Nicely trained humans ;-)

When we arrived in New York though, everyone was really tired. Grouik couldn’t be stopped from meowing anymore. The humans had to pick up all their pieces of luggage and… Milou! And then we had to go through immigration (what’s that?) and some people from our new country were supposed to check if everything was okay with us (our health certificate and stuff).

Turned out no one knew exactly where Milou was supposed to be picked up. The humans were being even more concerned. Where was Milou ? They were told that “someone would bring him next to the luggage pick up.” While my human’s husband was picking up the luggage, my human spotted Milou’s box alone in a corner. She ran to pick him up. He seemed and was doing fine! The humans weren’t very happy that he had been left alone like that.

When all the luggage was put on some kind of cart with us on top, we headed for the inspection. It was the end of the afternoon in New York, but the five of us were feeling like it was late evening (like it was in France). We all had been up for 24 hours actually.

The humans had put towels on our bags and Milou’s box so that we wouldn’t be afraid by all the humans around. The customs woman only spotted Milou’s box and asked what it was. The humans answered “a cat.” And she said “go ahead.” And we were out of the airport without any inspection. I think the humans were very happy about that. They were tired. So were we. And I think my human was a little afraid I would bite someone who would examine me. I don’t like people I don’t know to touch me like that!

When we arrived at our new home, we started exploring quickly. 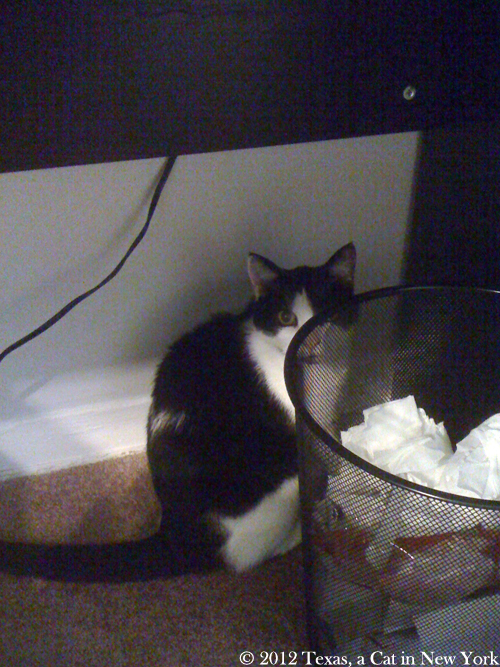 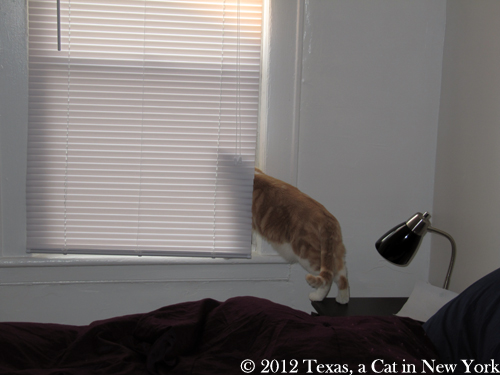 And although there were some initial tensions between us… 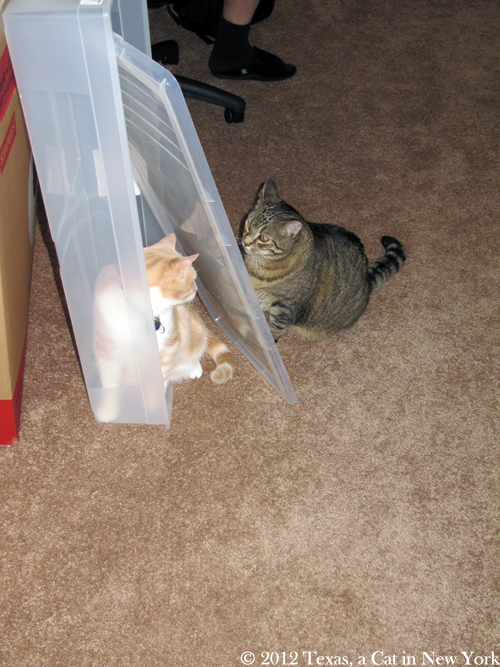 …each one of us found a favorite spot and/or position to hide (just in case). 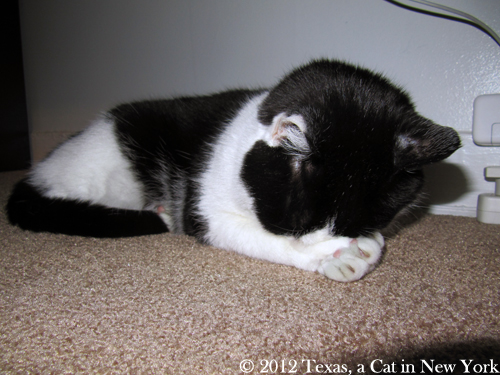 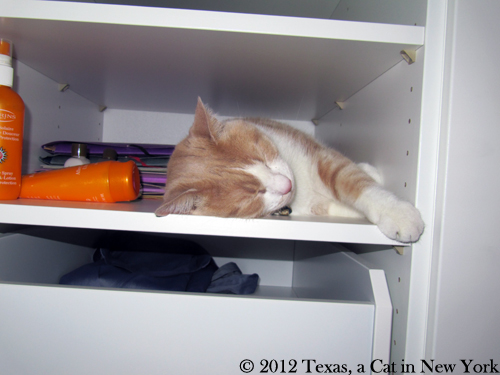 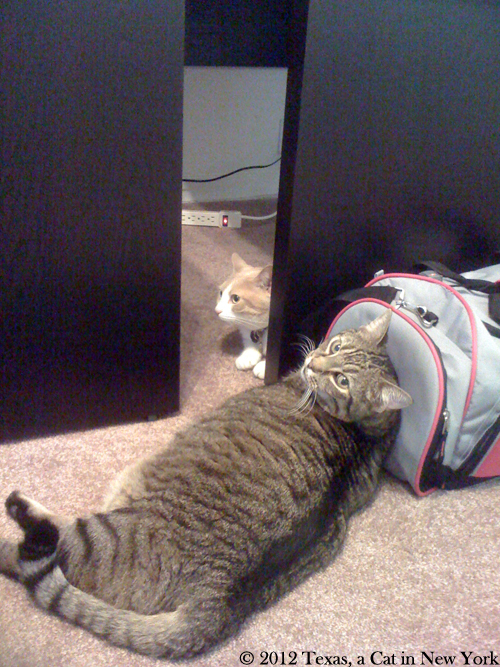 And everything went fine!

A quick note on the humans:
– They traveled back and forth not to leave us behind
– They shrugged at people who told them “What?! You’re taking the cats with you?!?!! Is it really reasonable?”
– They spent some dear money so that we would move with them and do so in the best way they knew possible
==> So it is not mission impossible to move with your furry friends (I do believe our friends at Animalcourriers can tell you about that – the humans didn’t know them then).

Although there are plenty of stories on the Internet about furry friends being depressed and getting lost by trying to get back home after their humans had moved (my human was very afraid of that), we adapted pretty quickly and explored the area in the following days we arrived. There is no fatality (vocab builder)!

So, please, do consider moving with your furry friend if you can! On the other hand, don’t have us take the plane just to go on vacations please, this is not pleasant.

If you have questions I’d be glad to answer them or ask my human to do so.

EPILOGUE
(I promise I’ll be quick!)

We would like to of course thank our humans (even if, well, they acted the way they had to!) and also the airline company Lufthansa. Why? Because my human sent them a letter complaining about how it was hot in the plane and if they, humans, had suffered from that, we probably had suffered too.

Well, to apologize, the company sent my humans a big box of toys and treats for us! Wasn’t that nice? 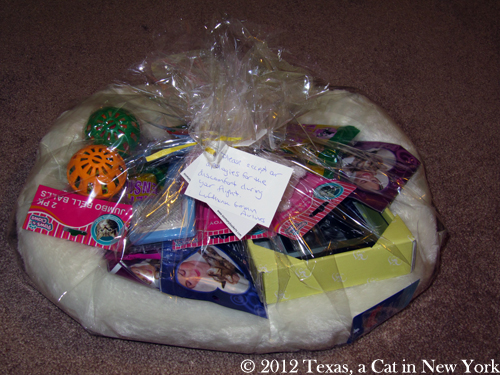 Thank you Lufthansa!
(My human wanted to add that Lufthansa hasn’t asked us to post this. In fact, my human just wanted to let our discomfort be known because she felt bad for us and any other kitty traveling that way, she didn’t expect this nice gesture)

32 thoughts on “How three cats (that’s us!) moved from France to America with their humans — Part 2”