Have you heard of Choupette, Karl Lagerfeld’s cat? I mentioned her once here.

She has been in the news these past weeks (Check for example here and here). I am very happy for Choupette. I must say that these humans that call themselves journalists are missing the whole story though.

The story being: a feline having his human do everything the feline wants him to do, how is this news?!

French model Baptiste Giabiconi asked Lagerfeld to babysit the feline for two weeks around Christmas, Lagerfeld told WWD, but Choupette was “too cute” so he “refused to give her back.”


Since then, the 9-month-old cat has become the apple of his eye and has been treated to a life of luxury. Lagerfeld has seen to it that Choupette is “beyond spoiled.”

She deserves it! We all do!


The cat has two maids who tend to her night and day and document her daily life in a diary of sorts for Lagerfeld.

Err, excuse me “journalists”?! This is what we call having humans. There are dozens, probably hundreds of cats out there doing just what I’m presently doing, dictating our blog entries and tweets to our humans.

It is time for humans to stop turning a blind eye to reality: we don’t simply rule; We rule the Internet and we rule the world.

The sooner humans will realize it, the better. I mean, can you resist this face? 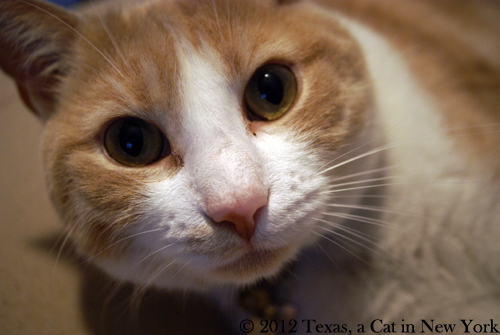 Now, bring me some kibbles and catnip.