Many things happened since I last wrote, but I’ll be quick as I intend to blog about some of this next year.

First, the human made a Christmas tree in honor of Texas, Milou, and Grouik on a famous Austin road where people decorate trees every Christmas!

Then the human got a surgery… not sure what it is exactly but it didn’t look like something fun. Apparently it’s like going to the vet for humans or something. She came back the same day and smelt very weird and she was with one of her human friends. Whiskey immediately went to hide under the sink! And I was supposed to be the scaredy cat?!

That was funny because it was late and our human’s friend looked for Whiskey even outside in case he had managed to escape. In the middle of the night she was calling “Whiskey!” outside! MOL! Then they heard the closet door. And I knew my human’s friend was a good human because she pushed everything on the side so that Whiskey would not be near anything dangerous but could still hide there. Isn’t that nice?

The human is doing better, and she spent the week between Christmas and the Meow Year with us, which was nice, but we can’t sleep with her right now.

Also her friend offered her a laser pointer that is super cool. Only Whiskey is kind of monopolizing the human to play, but I manage to chase it too. We haven’t caught it yet though.

(I don’t look too impressed in this video because I had to direct my human to film this so I could show you, but I can catch the dot if I want to. I just don’t want to right now because it would frustrate Whiskey.)

Oh, I almost forgot! We deaded a mouse!

With that said, we look in the direction of 2018 with the hope that it will bring more wet food, more cream cheese, hours of chasing the laser pointer and the cat-a-pole, followed by hours of napping and plenty of petting from the human. And that we can go back to her room and sleep on her bed too. And we wish you the same for a very Happy Meow Year!

I have noticed that there were many kitty furriends living in Texas (especially Twitter furriends)! So maybe that is one of the reasons why when people decorate Christmas trees on the road here, you can find… kitty Christmas trees!

Below are two trees that my human saw on Loop 360 in Austin among dozens of decorated trees (you can learn a bit more on the tradition of Loop 360 Christmas trees on my human’s blog). I think they are pretty cool! If the humans would trust us with a Christmas tree, this is how I would like it decorated! 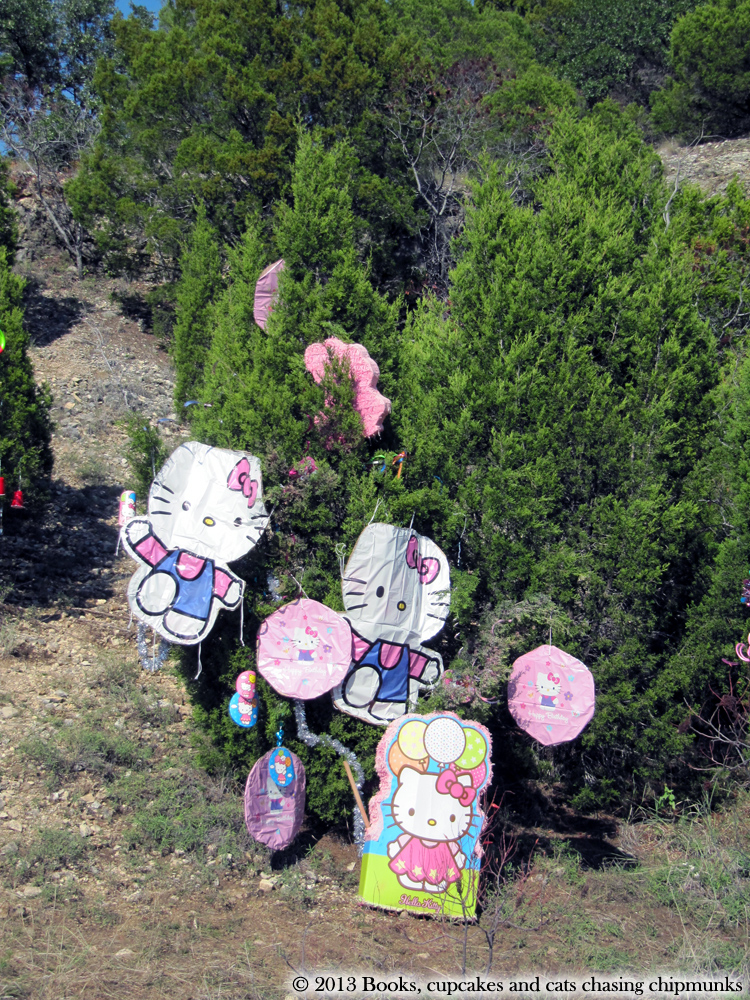 How are your humans decorating their Christmas tree?